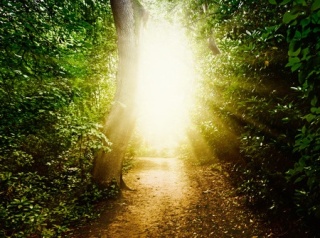 “Stop! Stop! Stop!”
The voice, and the splattering of water, yanked Kara out of the spell she’d been attempting. Opening her eyes, she found herself slightly damp while the woods around her dripped with water. Huffing out a breath, she turned on the old man by her side.
“Why did you do that?” she demanded.
“Why were you trying to set the woods on fire?” he asked, lowering his bushy brows over his dark eyes. “There are living beings here that need their home.”
“I wasn’t setting a fire,” she explained. “I was opening a portal.”
“No,” he said, shaking his head, “you were setting the tree on fire.”
She turned back and looked at the scene in front of her. The trees, on either side of the small path in front of her, were a bit charred. Hell, why wasn’t this working? Most people could open a portal without any effort, but she couldn’t. She could do other things, bigger things, more dangerous things without any effort at all, but the portal eluded her.
“I wasn’t trying to start a fire,” she said, turning back to her grandfather.
“Well you were.”
“You know, you should be more supportive,” she said. “Gram said you should pick less and support more.”
“Yes, but you weren’t burning down your Gram’s house were you?” he said, reasonably.
She pinched the bridge of her nose. He was right. Of course he was right. He was always right and that’s why it sucked so much. As much as he worked with her, trained her, opening a portal was something she couldn’t do.
“Kara,” he said, “I understand your frustration. But setting a fire is no way to deal.”
Against her will, she laughed. “I wasn’t trying to start a fire, you old goat. I was trying to open a portal. As if you didn’t know.”
He grandfather smiled. “I kind of figured that out. Come over here.”
He took her arm and led her to a fallen log. Sitting, he pulled her down next to him. He didn’t say anything, but then she was used to that. No one hurried her grandfather, least of all her. He would speak when he was ready. Until then, she breathed deep and soaked in the serenity of the forest. Sunlight filtered through the high canopy causing sparkles of light to dance here and there as the wind blew. She’d grown up playing and learning in this magical place. Never, ever, did she want to leave.
“I think you are putting too much effort into your magic.”
“What?” she turned to stare at the man next to her.
He pulled contemplatively at his beard as his soft grey eyes watched her behind wire-rimmed lenses. “You are so powerful. I think your power is overwhelming the spell causing it to fail. I’ve been thinking on this for quite a while. Small children can open a portal, but not you, because your power has never been small. It’s always been more mature.”
“So I should…throttle back?”
“Yes, exactly. Your magic should nudge, not push and shove.”
Rising, she moved to stand in the middle of the small deer path. Small, she told herself, gentle. The magic welled up inside her and Kara took a small, gentle tendril and allowed it to flow out into the space before her. She pictured a doorway forming in her mind and saw her grandmother’s kitchen garden. This was where she wanted the portal to take her. Home. Nowhere fabulous. Just home.
“Kara.”
She opened her eyes to find a bright shining doorway hovering right above the path. No fire, this time, but a true portal. Without looking away, she gave her grandfather a thumb’s up.
“Oh my gosh, it’s beautiful.”
She longed to do a jig, but didn’t dare. Not yet anyway. Once back home she’d do a victory lap around the garden with her grandmother’s pet goat, Sissy. Right now, she concentrated on keeping her magic in check.
“Wish me luck,” she said. “I’ll see you at home.”
Smiling, she stepped into the bright sphere.
Hope you enjoyed it. Now run over and check out how the other bloggers handled the picture.
Jessica
Bronwyn
Kris
Jessica D
Paige
Kayleigh