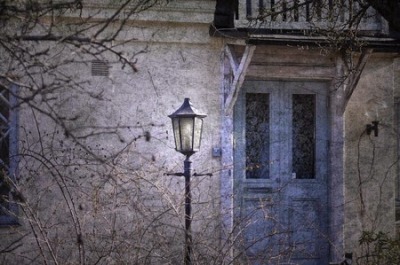 The evening breeze lifted Charlotte’s hair bringing with it just a hint of the coming autumn. The moon, shiny and plump, in the sky offered plenty of light to see the large, grey building. Windows, exactly twelve, ran in two rows letting passerby know there were two floors, but nothing more. Heavy drapes covered all the glass, not allowing anyone a peek into what may lay inside. A large wooden door, painted a soft blue-gray, was softly illuminated by an old-fashioned metal lamppost, and, looked to be, the only way in or out.
“I don’t think this is a good idea,” Charlotte said, coming to a stop in the middle of the sidewalk.
Jane, her accountant wardrobe ditched for the evening, turned to face Charlotte, hands on her hips. “What are you talking about? Do you know how hard it was for me to get tickets?”
“Besides,” Theresa chimed in, “how many times do you turn forty? We wanted to get you something amazing for your birthday and, you have to admit, this is amazing.”
Charlotte gazed at the building. “Is it safe?”
Jane nodded. “I checked it all out. The Club is very exclusive and rarely allows humans in. The only way I got tickets is it’s your fortieth. For some reason, vampires think that number is special. I had to apply nearly eight months ago, fill out quite a bit of paperwork. Come on, Charlotte, this is a once in a lifetime experience.”
“For all of us,” Theresa put in. “You’re the youngest so we won’t ever get another chance to see inside.”
Charlotte ran her hands up and down her arms. They were right. The Club was an once-in-a-lifetime deal, for them anyway. Vampires came and went, since they owned and operated the establishment, but humans weren’t allowed, unless they received special permission.
“You’re right,” she finally spoke. “It’s my fortieth and I deserve something special. Thank you two so much for this gift.”
Jean smiled. “It’s our pleasure. You deserve an amazing birthday.”
Theresa hooked her arm through Charlotte’s as the three women walked to the blue door. Charlotte dug the gold-embossed invitation from her purse and rapped on the door. After a long pause, a panel slid open and she pushed the invitation through.
Another pause and, she wondered, if they wouldn’t be admitted anyway. Finally, though, locks started opening and Charlotte’s eyes widened. There had to be ten locks, maybe more. The night grew silent again and the door opened revealing a man holding her invitation.
“Are you Charlotte Reynolds?”
Ireland was thick in his voice and she looked up to find the prettiest blue eyes watching her. Okay, the rest of him wasn’t bad either. Thick, black wavy hair streamed to his shoulders and the beauty of his face probably made people weep. Damn, if he were her man she’d keep him behind locks too.
“I’m sorry,” she managed to speak, “yes, I’m Charlotte. And these are my friends Jane and Theresa.”
He stepped aside. “Please enter The Club and be welcome.”
They stepped through the door to find themselves in a very small foyer. The man closed and locked the door behind them. When the last lock clicked into place the wall across from them slid open revealing a courtyard. A large fountain dominated the space with only a few people sitting in a small private area off to one side.
“Follow me,” the man said and motioned for them.
Charlotte fell in behind him and thought, yeah, she would follow him forever. He had a world-class ass encased in tight black pants. And, she reminded herself, he looked to be twenty-two so knock it off. He’s young enough to be your son.
He led them across the brick-paved courtyard and opened another door. Music, lights, and colors washed over them and Charlotte stood stunned trying to take it all in. People dressed in everything from evening gowns to ratty shorts danced, talked, and milled about. She’d never seen a more confusing scene.
A woman stepped up to them and smiled, revealing small fangs. “Hello and welcome.”
“This is Charlotte Reynolds,” the man spoke, “she’s here celebrating her fortieth birthday.”
“How exciting. My name is Andromeda and I’ll be your hostess this evening. Let me show you to your table so we can begin your party.”
Charlotte turned to the beautiful man; a tad disappointed he wasn’t staying with them. “Thank you so much.”
He took her hand and bowed low, kissing her palm. “Lovely Charlotte. I haven’t been twenty-two for a very long time and, believe me, you’ll see me later.” With a wink and a flash of fangs, he walked away, leaving her staring after him.

And there it is. My piece based on the above photo. If you have thoughts or ideas just leave them in the comment section. Now, run over and check out the pieces the other ladies wrote.

See you all on Wednesday!! — Gwen

7 thoughts on “MAY FLASH FICTION – BASED ON A PICTURE”