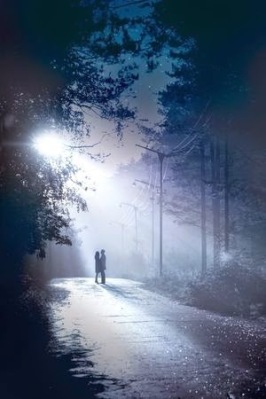 The young woman, barely grown, lurked in the bushes waiting. He told her he’d be waiting, but she couldn’t see him. Dang, Danny anyway, asking her to sneak out. If her mama and daddy found out, she’d be grounded for a thousand years. She’d wanted to see him so bad though, now, here she was, sneaking around practically in the middle of the night.
A small light flickered across the dark road and she quickly fumbled with her own flashlight. She flicked it on three times in a row and smile as Danny burst out of woods. She hurried out to meet him and they stood a moment just smiling like loons at each other.
“Jacey, I’m so glad you came,” he said taking her hand.
“Me too, but I can’t stay long.”
“Believe me, I know. If my mom and dad find out I’m not in the house they will destroy me.”
Before she could respond, a bright light appeared overhead, illuminating the stretch of road. Everything lit up, bathed in an eerie blue-white glow. Danny grabbed her hand as a low humming began, more something that was felt in the bones than heard. Jacey instinctively backed away from whatever was coming toward them. Could it be a helicopter? It wasn’t a plane. She might live in the country, but she wasn’t stupid. Or, maybe she was, since she’d snuck out of her house and no one knew where she was.
The one light separated into four and began to swirl around in a circle, like a wheel at the carnival. Then, the wheel of lights moved toward the ground and Jacey saw it wasn’t attached to a helicopter.  No, the vehicle with the lights was disc shaped and large…really large. The trees, on either side of the road, slowly began to bend away from the vehicle, but from what she could see, nothing was causing the movement. She couldn’t feel any wind at all, but the trees still moved as the saucer began to lower towards the road.
“Aliens?” Danny said, hoarsely. “There’s no such thing. What’s going on?”
Jacey shook her head, too scared to reply. This couldn’t be happening to them. All they wanted was to meet and hang out, maybe share some kisses. They hadn’t wanted trouble. And, they certainly, hadn’t wanted to run into anything weird. Nothing ever happened in the small town they lived in. Of course, Johnny Tilder and his friends had sworn they’d seen Bigfoot while they were camping, but everyone knew Johnny and his friends took drugs. Besides, there weren’t such a thing as Bigfoot or aliens. And yet, there wasn’t any other explanation for the thing currently coming toward them.
When the craft hovered about fifteen feet above the road, an opening appeared and a long ramp slid out. A mechanical voice began to speak and it took a moment for Jacey to understand what it said.
“Attention Earthlings. Please come up the ramp and prepare to be probed.”
Danny let loose with a high-pitched shriek and began dragging Jacey behind him. The two teens ran down the road until they found the path she’d taken earlier to meet up with him. They ran like all the hounds of Hell were on their trail and they didn’t stop until they were finally back at Jacey’s house.
Grejak closed the door of their ship and, fell against it, laughing. The two humans had run so fast, it was as if their feet hadn’t even touched the ground. Chartex came through the doorway from the main bridge and he too was laughing.
“You must come and see the holo-images of the event,” Chartex said. “I’m so glad we invested in the new equipment. It caught everything, including the high squealing cry the male made.”
Grejak followed his best friend back to the bridge as their ship began to leave the small planet’s atmosphere. With the new footage, they were sure to win the top spot in the Zoinked competition. How could they not? Tricking humans always made the crowd laugh and the young human’s screams would finally put them in the winner’s spot.

I hope you enjoyed! I was in the mood to write something just a bit funny and different. Now, run over the check out what the other ladies did with the image. I’m sure you won’t be disappointed.

See you all on Wednesday!! — Gwen