Hello and welcome to March flash fiction. This is where we write a story based on an image sent to us by Jessica J and Bronwyn. This month our pic is really cool. Check it: 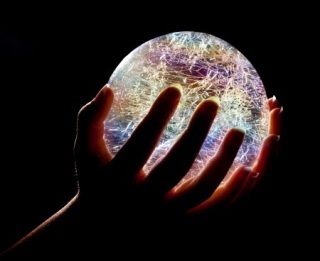 Tara held up the shimmering, multicolored orb and stared into its depths. The thing was amazing. It almost reminded her of something created from ice and stuffed with lights that she’d once seen at a winter carnival. This was no temporary holiday decoration though. The crystal ball was solid and cool to the touch. She rotated the piece in her hands trying to figure out how the artist had made it glow. She couldn’t see an opening for batteries and it certainly didn’t contain lights so how was it lit?
She looked around the junk shop she’d wandered into, but couldn’t find anyone to ask. Just as well, since the piece had to be well outside her price. Still, it wouldn’t hurt to enquire since it might be one of a hundred pieces they sold to gullible tourists for cheap. She doubted it though. She’d priced crystal balls before and they were expensive. None, though was as amazing as the ball she held.
Traveling for work was a pain, but she always tried to see some of the city. Usually, that meant, going to unique spots like antique shops. She never went to the high-end places, since they just didn’t have personality. She gravitated more toward the junk end of the spectrum. She loved the things they packed in since she could usually find a treasure. The orb was a treasure. She really hoped it wasn’t too expensive.
Staring into its shining depths, she tried to discern where the glow came from.
What’s your wish?
She looked around. Had someone spoken? She didn’t see anyone near. In fact, there wasn’t anyone in the shop at all.
What’s your wish?
What? She peeked around a corner. Nothing. Okay, the where was the voice coming from? She searched around until she saw a grate in the wall. There it was. She was probably hearing a conversation in the next room or building. She laughed to herself, feeling better to have figured it out.
She stared back at the orb. Were the colors brighter?
What’s your wish?
She stared into the ball. She didn’t care if the question was truly directed at her. It was too delicious not to think about. What if someone or something could grant wishes? What would she want?
“I’d wish,” she whispered softly, her breath gently brushing against the crystal ball, “for a wonder adventure. I’d wish for a wonderful adventure where I’d find an amazing man who would love me, all of me, for who I am and who I could love back. Oh, and if we’re going all the way, he’d be like so amazing looking and we’d have really stellar sex.”
She burst out laughing and hugged the orb close to her chest. Yeah, and with the wish and a quarter she might get gum from a machine. Maybe.
Wish granted.
The orb began to flicker brightly as colors slid over and around the surface. Tara held it up, dismayed. Hell, had she broken it? She hoped not. The piece began to heat up in her hands and she tried to set it down. For some reason, her fingers wouldn’t let go. No matter what she did, she clasped it tighter as the ball became brighter and brighter.
Colors swirled out until she was surrounded. Tara opened her mouth to scream, but in a second, she and the orb vanished.
Now go and check out the other flash fiction posts!
Bronwyn
Jessica
Kris
Jessica D.
Kayleigh
See you all on Wednesday!! –Gwen