Okay, so when I was a wee babe, much wee-er (is that a word) anyway than I thought, I had the most horrible crush on Tony DeFranco. Now, those of you who aren’t of a certain age are probably saying, “Who the hell is he?” Well he was just the cutest little thing in a skin-tight powder blue jumpsuit with huge bell bottoms you’d ever want to see. 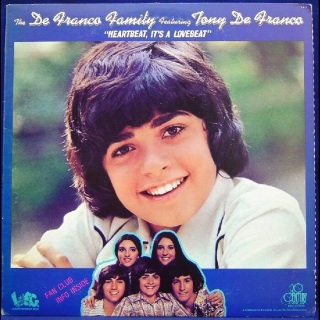 That’s him!! Isn’t he utterly adorbs!

Oh and he worse a sequin belt, cannot forget that most important accessory to just overload a guy with manliness. Anyway, he and his family (think the Jackson 5, but not that much talent) had a song out called A Heartbeat is a Love Beat and I loved him. I thought he was the next best thing to a chocolate chip cookie or something like that. He made my little 7 year-old heart go pitter-patter or mayhaps would that be a “love beat.”

Notice the powder blue jump suit! And his has a tiger on it. Grrrarrrr!!
I’m sure you are wondering why the crap I am bringing all this up. I will tell you, so hold your horses. My BFF and
writing partner Jessica Jarman and I were on IM and we were chatting about stuff when I mentioned I had found
the song. So I sent it to her. Then I went in search of the video. I knew there would be one. These people had a
TV show, though I don’t know how. So I found them on http://www.youtube.com dancing and singing their little hearts
out and sent it to Jess. Where we spent the next 5 minute laughing uncontrollably. Between the posh outfits
(the aforementioned powder blue jumpsuits) and the incredible dance moves (bad karate kicks and shoulder shrugs)
we were weeping by the time it was over.
Check them out on Youtube!! And notice they are featuring Tony DeFranco. He wasn’t some two-bit backup singer,
he was the star baby!!!!  And I bet he didn’t let anyone forget it. 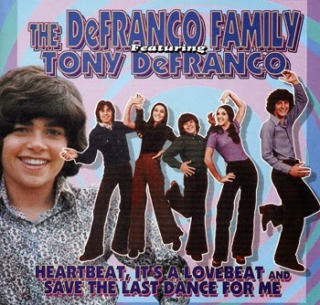 The point of all this rambling, and there is a point, is something along the lines of you can’t go back. But, of course,
that would be if I were mature and such. No, as most my friends will tell you, I’m pretty much 12 on a good day so
MY point is go back and look at who you had a crush on when you were a kid. If you’re still crushing on those
types of people . . . RUN AWAY!!!!! Because believe me I have way outgrown jumpsuits and sequined belts. . . or
not. 😀
Listen to my heart pound!! Listen to my heart sound! And they could write awesome lyrics too. 🙂
–GC